Suggestions in Response to FHA Annual Report to Congress

FHA Commission, Brian Montgomery issued his annual report to Congress on November 15, 2018, discussing the state of the MMIF fund and discussed risks to the improving health of the fund, among which was included the topic of the down payment assistance (DPA). This article provides a brief summary of the issues raised in the report, and then provides responses and suggestions for consideration.

The report raises the concern that loans with down payment assistance from “self identified” government entities, which now consist of 11.39% of all FHA purchase production, perform worse historically [7.37% Serious Delinquency (SDQ)] than loans which do not have DPA (4.3%).

The report continues by stating, “FHA is concerned that certain entities are now operating … on a nationwide basis … that appear to increase costs, but not benefits, to the borrower and put the MMIF fund at risk.” It then goes on to discuss that FHA needs to take “swift and decisive action” to define who the prohibited sources (providers) of DPA are in order to avoid the losses which took place due to seller funded DPA in the past, essentially equating the practices of today with the events of a decade ago.

On page 40 of the same report, the SDQ of DPA types is shown in a graph base loan cohort by year originated: 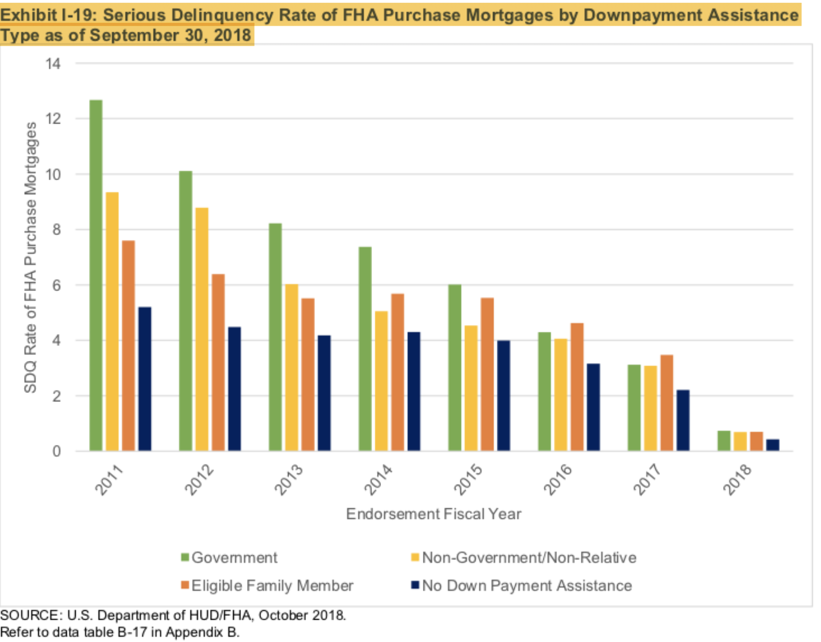 FHA is understandably concerned about the prevalence of national DPA providers given the failure to adequately regulate and set standards for the use of seller funded DPA a decade ago, resulting in losses to the MMIF fund. However, when HERA was passed in 2008, tens of thousands of monthly would-be homeowners were shut out of the homebuying process, which exacerbated the real estate crash. In addition, the elimination of DPA resulted in a massive drop in homeownership rates, particularly minorities, which have not recovered to this day.

Is there a way to responsibly provide DPA while at the same time addressing the concerns of potential future risks as outlined in the report? We can state emphatically yes. CBC Mortgage Agency (CBCMA) was organized by the Cedar Band of the Paiute in 2013 as a government provider of DPA. Our goals were threefold:

1. Increase access to homeownership opportunities to those not generally eligible for DPA from State Housing Finance Authorities (HFA) through innovative programs.

2. Reduce costs for borrowers, in terms of rates and fees, while attempting to help lenders avoid losing money while serving these borrowers with FHA/DPA loans.

3. Create national efficiency in an existing market of highly inefficient conglomerations of state and local programs with differing rules, guidelines, and delivery processes.

CBCMA has largely succeeded in these missions, while taking extreme care to ensure the FHA insurance fund is protected. CBCMA created the CRA Note Exchange, which allows DPA to be funded through non YSP mechanisms, a concern raised by the HUD IG.

CBCMA’s rates and fees are lower than a majority of the state housing programs, creating a competitive market to bring down costs to consumers. In addition, every borrower receives 12 months of post purchase counseling through Hope Loan Port to improve loan performance. Our performance data is carefully monitored, and shows that the loans perform better than the overall FHA SDQ rate of 4.11% (3), which includes loans that did not receive DPA, indicating that our efforts to ensure sustainable and successful homeownership are working.

The State HFAs would prefer to have a regulatory monopoly in the provision of DPA and FHA loans. Such a monopoly, however, inevitably leads to more underserved borrowers, fewer options and higher interest rates on FHA mortgages. Not all Governmental Entity programs are created equally. While some have robust programs that generally meet the needs of borrowers, others have underdeveloped programs that do not. CBCMA has found that most of its volume comes from areas that do not have robust programs, do not provide quality service, or price the interest rates on their FHA first mortgages too high.

HUD’s interest in protecting the MMIF and the interests of the borrowers HUD is tasked with assisting are best served by the creation of a monitored marketplace for Governmental Entities. Several elements are needed for a monitored marketplace: (1) data on individual Governmental Entities, (2) uniform minimum credit borrowers receiving DPA or minimum performance standards for the FHA first mortgages, (3) sufficient market participants (4) reporting and monitoring of FHA first mortgage performance.

HUD should require that for every FHA loan that receives DPA from a Governmental Entity, originators must enter an EIN or similar identifier in the FHA system when originating a loan. By doing this, HUD can track the performance of loans in which the DPA has been provided by a Government Entity, and determine what credit standards should be applied to recipients of DPA.

HUD is right to express concern about how DPA is utilized in the market today. However, HUD should not take action which reduces access to credit and decreases market options by entrenching inefficient or monopolistic behaviors, without careful analysis of data about the performance of the government entities it wishes to regulate.

Whether you’re an Independent, a Republican or a Democrat, we can all agree that today’s political environment is toxic and unproductive, preventing Washington from accomplishing important work for ou

Our country suffered the worst economic downturn in living memory as a result of the financial markets crash in 2007-2008, precipitated in part by the housing and mortgage market collapse. Homeownersh